Baby's Birthday is the episode 5a of Season 1 of Kuu Kuu Harajuku.

The episode begins with G giving the girls instructions on what specific tasks they're in charge of for Baby's birthday. Love shows off her unfinished gift when Rudy pops in and introduces his nephew, Jimmy, who is the treasurer of his high school A.V club and an aspiring photographer.

Rudy promises that in exchange for shooting a music video, Jimmy can ask one of the girls to go to the prom with him, much to their disgust. Love shows Rudie the gift she was preparing and mentions that it's not finished yet. Rudie desperately convinces the girls to shoot a music video, by explaining all the hard work he did. The girls agree that Baby comes first and head towards the Kawaiimobile while Rudie and Jimmy trail behind.

Baby comes down the slide and greets everyone, until she realizes she's all alone. She notices the nicely wrapped present on the table, and takes a peek at what could be inside.

A small birthday card pops up with a warning that says "do not open until we give it to you". Despite the warning, Baby tears the bow off the gift, releasing what's inside. A yellow Rainbowdian is unleashed and introduces herself as Yellow. She proceeds to announce to Baby that it's her birthday. He asks her if she wants to celebrate and, after careful consideration, agrees. As they run off to have fun, the rest of the colors of the rainbows explode out of the present as well.

The girls, after hours of prep, return to their home to find the place completely littered with splashes of color. Love notices her opened gift and tells the girls that the Rainbowdians have escaped. It was supposed to be a portal rainbow, but the colors didn't have time to stabilize before Baby opened it. The colors are described as being "volatile" and are not able to cooperate together. Each color takes a different amount of conditions to properly stabilize. G leads the girls to the find the colors and agree to meet up at the mall before any more damage is done. Meanwhile, the birthday celebration is just getting started as Yellow and Baby compliment each other about being perfect and decide to give each other makeovers.

Two other colors, Orange and Blue, are seen fighting over the color of the ocean before Green joins them. Music attempts to stop them, but the colors decide to work together and user her as a canvas. Love politely asks them to go back into the box, but another argument between the colors ensue.

Love mentions that they will get nowhere unless they work together with Yellow. With that being said, Green and Orange resume fighting as Blue runs away in tears. Colonel Spyke, rolling up in a tank, questions what's going on. After a quick explanation she offers to assist the girls. Orange sprays the tank, turning it orange and angering Spyke who goes to shoot it with a monochrome cannon. Colonel Spyke continues her pursuit on the colors while Rudy and Jimmy, hiding in a nearby bush, burst with excitement over the action they just caught.

Baby unveils her outfit to Yellow who mentions something is missing and changes her dress to all yellow. They hear the sound of a carnival outside, so they agree to go there next. Violet and Indigo are seen fighting and G invites them to help throw a party. At first they disagree until G mentions that anyone could hardly tell them apart and they become friendly, throwing each other compliments. Colonel Spike, after seeing the display of affection, reveals she had captured Red who was painting all the traffic signs red. Music and Love managed to round up Yellow and Green, while Angel brings in Blue right after. The only two things that are missing are Yellow and Baby. 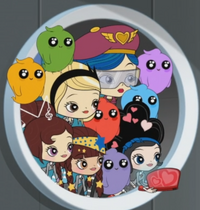 At the carnival, Yellow and Baby are enjoying the ride, until Baby admits she is still feeling lonely. She mentions it's not a birthday without her friends, who happen to show up with all the other colors.

They all buckle themselves in and enjoy the ride, the acceleration from spinning causes the colors to morph together and turn into a spectacular rainbow and fly away. Rudy asks Jimmy if he caught that on camera, but notices he went straight over to Colonel Spyke and asked her to go to the prom. Initially she scolds him, but agrees to go with him if he washes her tank. Rudie, proud of his nephew, hovers over with the video recorder but crashes off-screen.

At the party, Baby exclaims that it's the best birthday ever and rushes over to open her gift. The rainbow appears and illuminates the entire room and the girls share a group hug while Rudie, still hanging on to video camera, crashes in the background, leaving the girls laughing.

Retrieved from "https://kuukuuharajuku.fandom.com/wiki/Baby%27s_Birthday?oldid=3062"
Community content is available under CC-BY-SA unless otherwise noted.