Colonel Spyke is a character that appears in Kuu Kuu Harajuku.

Colonel Spyke appears in Baby's Birthday. She agrees to go to the prom with Jimmy at the end of the episode.

Colonel Spyke has a more predominant role in Bad Boy and Little Girl. She volunteers to give the girls a tour of the airfield and later recruits them into helping protect it from the aliens. She doesn't seem to like music (theirs' anyway). According to Spyke, colonels have the responsibility of welcoming alien lifeforms, establishing alternate universe containment, and public relations, the latter making her shiver.

She has a cameo appearance in Phony Ponies as a member of the audience.

In Super Kawaii Sunday she is able to apprehend and arrest General Nofun and Commander Boring. 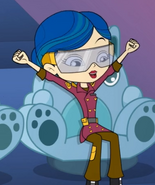 Colonel Spyke without a hat as seen in Phony Ponies.

Colonel Spyke is angry when she discovers HJ5 took the rocket in Kablooey Chewie.

The Chewie clones love her.

The big book of racing rules.

Spyke handed the soldier the heavy book just to see if he could hold it up.

Soldier noticing how heavy the book is.

Six seconds later, the weight of the book knocks him down.

Spyke with the racing flag.

Everyone waiting to find out who won the race.

Colonel Spyke presenting R.O.D. with the first place trophy.
Add a photo to this gallery
Retrieved from "https://kuukuuharajuku.fandom.com/wiki/Colonel_Spyke?oldid=7164"
Community content is available under CC-BY-SA unless otherwise noted.