G Force is episode 23b of season 2 of Kuu Kuu Harajuku. .

HJ5 and the Kimberlys compete to be the first band to perform on a mysterious stage on the Red Sparkle planet. Since the Kimberlys lack the technological skills to construct their own space rocket, Angelica joins forces with them to help them defeat HJ5.

The episode opens with Love explaining she got stranded on a distant planet alone with no supplies. Then earlier that day is shown, starting off an explanation of how this occurred.

Rudie arrives in the science lab announcing he has booked HJ5 a exclusive opportunity, to be the first band to perform on a stage constructed on Red Sparkle planet by unknown individuals. Love dismisses his proposal as ludricously improbable, since the existence of that stage is just a fallacy. Rudie assures her the stage is genuinely there, but there's just one problem, he doesn't know how to get HJ5 to the planet. Love has an idea though.

HJ5 go to Colonel Spyke and ask to borrow the use of her XL-7000 rocket to go to Red Sparkle. Colonel Spyke refuses their request at first until G reminds her HJ5 are owed a big favor for saving the planet from destruction. Colonel Spyke orders everyone in the command centre to take a coffee break and to leave the rocket keys on the console.

The viewscreen in the command centre activates and the Kimberlys appear on it, taunting HJ5 that they'll be the first to perform on Red Sparkle's stage with a stolen HJ5 song. Love mocks their inability to travel in space, until her rival Angelica appears on the screen and explains she built a rocket for the Kimberlys to use. And that's she's also locked them in the command centre so they can't get out.

HJ5 arrive on Red Sparkle slightly ahead of the Kimberlys and go to plant their flag on the stage, claiming it for themselves. Enraged that HJ5 won, Angelica brings out her secret weapon, a hurricane generator. Because if the Kimberlys cannot perform first on the stage, she won't let HJ5 perform either. Angelica and the Kimberlys escape in their rocket. HJ5 and Rudie try to get to their rocket, with Rudie and Love being the last to climb up to the airlock. Love's toolkit is blown away in the storm, followed by Rudie and her. At the very last minute, Love throws Rudie into the rocket and it leaves without her.

The flashback ends and then Love is surprised to hear Baby speaking from behind her, offering a mango smoothie. G then explains it took them a long time to turn the rocket around and come back. The girls are disappointed they went through all this effort and there isn't anyone on Red Sparkle to perform for. Then a large crowd of purple fluffy creatures swarm the area, cheering for HJ5. Music points out they do have an audience after all. The creatures produce Love's lost toolkit and return it to her.

Rudie trips and falls out of the airlock.
Music: That’s one small fail for Rudie, one giant faceplant for Rudiekind.

HJ5 in the science lab.

Angelica and her new evil friends.

Angelica and the Kimberlys.

Music warming up to do some heavy duty door kicking.

Angelica and the Kimberlys. 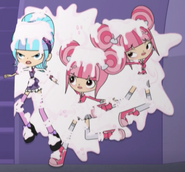 Angelica, 4, 5 Stuck in a Marshmallow Trap! 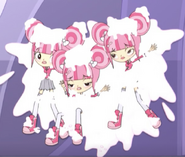 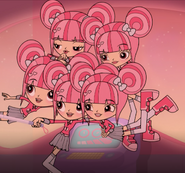 Rudie wants G to plant the flag first, so they can claim ownership of the planet.

HJ5 planting their flag to claim the stage.

Angelica and the Kimberlys in their spacesuits.

You are the worst evil assistant ever.

Angel interrupts Angelica’s monologue because she found her lost shoe.

G helping Rudie hold on during the storm.

Baby has a smoothie for Love.

The Red Sparklians are excited a band arrived to use their stage.

Love hugging her tool kit Rebecca.
Add a photo to this gallery
Retrieved from "https://kuukuuharajuku.fandom.com/wiki/G_Force?oldid=5070"
Community content is available under CC-BY-SA unless otherwise noted.