Game Over is Episode 3A of Season 1 of Kuu Kuu Harajuku. It originally aired on October 5, 2016.

HJ5 accidentally get trapped inside a cute video game filled with evil cheeseburgers and flowers. Can they escape unharmed and find out who sent them in there in the first place.

The episode opens up with the girls running and jumping on platforms inside a video game before a transition shows them in the real world, extremely bored. G is looking at several different items but can't decide which one she wants to pick. Rudie mentions that she has one hour to decide what she wants for the "Bobbles" magazine article about their favorite things. According to Music, Angel and Baby are the only ones who haven't picked an item (although Baby will most likely pick some random thing at the last minute). The other girls discuss that they all had a difficult time picking their favorite thing before the doorbell interrupts the conversation (and gives Baby her "favorite thing"). Music gives G a quick pep talk, but it doesn't help her choose anything faster. Baby opens the door and finds a package delivered on the doorstep. Outside the building, a mysterious woman emerges from the bushes and giggles, saying she has the girls right where she wants them.

Baby brings the package inside and notes that there is no tag for who it is for, but Angel goes and rips it open anyway. Love determines it's a video game console, possibly a prototype due to the lack of information on it. Angel reads the instructions which state all players must place their hand on the console.

Love goes into major detail about this sort of technology, forcing a bored Music to walk away and plug in the game system to the television manually. 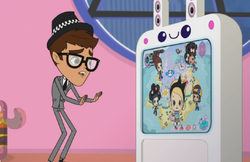 The console starts up and all the girls sign in using their hand. Rudie attempts to talk them out of it but the girls are teleported into the game realm. They appear on the television monitor, but Rudie calmly tells them to follow his lead before he passes out. Love explains that the game system used their DNA to create digital avatars of themselves. Rudie suggests he pulls the plug but that will cause the game to shut down and have their DNA erased from the hard-drive, permanently! Rudie knows nothing about video games, so he employs his nephew Jimmy to play.

Back inside the game, a rainbow spawns in the background and two unique icons of a flower and hamburger appear before a panda and cat icon appear as well as an image of G's charm bracelet. Angel realizes all the symbols were all of the items G couldn't decide as her "most favorite thing". Whoever created the console specifically wanted G in there. A robotic voice plays overhead telling them to follow the rainbow.

In the real world, Rudie is desperately trying to get a hold of Jimmy and explains he's doing homework. Meanwhile, the girls press on to "level 1" which is themed with flowers. The flowers grab a hold of Baby, Angel, and Love, while the remaining girls beg for Rudie's assistance. Jimmy flies through the door in a computer chair with a joystick and begins playing. Jimmy explains the flowers they are fighting are basic enemies in the game, they need to find the big boss flower, which promptly unearths from the ground in front of the girls. The girls have to fend for themselves, Jimmy can only help by using his voice as guidance. Jimmy tells the girls to collect rainbow coins for powerups, guiding the near-powered Music to another coin. The boss spawns in front of her, but she bodyslams it's roots and is able to run past and collect the coin. Music has successfully leveled up! Using her new powers, Music destroys the flower boss, saving the rest of the girls and propelling them forward to level 2 - burgers!

The burgers begin to charge towards the girls, and Music jumps ahead and uses her power up, which immediately fail. Jimmy mentions it's an obstacle based challenge. Angel comes up with the idea to use the buns as a platform to bounce off each burger.

Angel grabs the mallet power up which allows her to destroy all the burgers. They completed another level! The girls discovered a secret path which lets them skip ahead to the final level but one thing is missing, the bridge to cross the waterfall! Suddenly, G's charm bracelet appears and acts as a bridge. The overhead voice tells them to cross the bridge, but something in the voice is familiar to G.

A flashback begins, which shows G inside a flower shop. The girl (named "Saywha") that appeared outside the lounge is inside that flower shop, telling G she's ready to the join the band because she changed her voice (using autotune). G tells her she never promised she could join the band. Saywha says she would be a perfect addition but G believes HJ5 is perfect just the way it is. From that point forward, Saywha was planning revenge.

G runs over the bridge which collapses, sending her into the waterfall. Jimmy attempts to put in some cheat codes to save G before she hits the bottom. G flies up in the air, with a mallet and the powerup, and restores the charm bracelet bridge. G defeats every enemy that gets in the way before being confronted by a digital Saywha who encloses the girls within four walls that slowly begin to close in on them. Jimmy mentions this is a "quiz show" level, where they have to answer one question correctly to open the vault and complete the game.

Saywha announces the question "What is G's favorite thing?" to which G responds, "I don't know." The walls, closing in tighter and tighter cause the girls to force G into making a quick decision. Love mentions that the game was programmed using their DNA, so the game knows the correct answer even if G doesn't.

Saywha laughs and taunts "bet you wish I was in your band now". G denies this and reminds her, HJ5 perfect is just the way it is, and it is also her favorite thing. Saywha screams and her pixelated image explodes, sending the girls back into their lounge.

The girls swarm Jimmy and thank him for his guidance and Music says that they'll do whatever he wants to make up for it. The episode ends with the girls entering hour 14 of their gameplay marathon "Elfen Scrolls of Dunbar". Baby just got her level 6 enchantress wand. Angel warns the girls to be careful, they're about to enter the cave of the Rockbutt Clan. Love volunteers to do the talking in-game because she's fluent in "Orcish". The camera pans to a bored Music, regretting her decision to make it up to Jimmy, wishing she had kept her mouth shut.

Retrieved from "https://kuukuuharajuku.fandom.com/wiki/Game_Over?oldid=2026"
Community content is available under CC-BY-SA unless otherwise noted.