General Ira S. Nofun is a character that appears in Kuu Kuu Harajuku. He debuted in the episode Music Baby. Currently, he is one of only two recurring villain characters on the show.

General Nofun is the leader of "Nofunland". He hates anything fun, including singing, dancing, and prancing. He gets mad easily and rarely smiles.

In Music Baby, he brainwashes the the citizens of Nofunland (and Angel) to worship the color gray and ban all forms of fun.

He's immune to adorable things and always carries a bottle of funblock (a parody of "sunblock").

In Labor of Love, Music accuses Nofun of being the mastermind behind the pony-corn attacks but he admits that only a monster would hurt those innocent creatures.

General Nofun appears once again as an antagonist in The Kawaiifier, where he wants to ruin the Kawaiification Festival. He is accompanied by Commander Boring. His plans don't go so well, and at the end of the episode he is arrested by Colonel Spyke.

Nofun appears briefly in Super Kawaii Sunday where we witnesses the girls fly by in Twisty T's car, which is being pursued by the giant camera. Once the camera reaches Nofunland, it reverts to normal size in his hand. The camera admits that Nofun is the least kawaii thing ever, to which he takes a proud selfie with it.

He has a pet cat named Moods Meow.

General Nofun without a hat as seen in Phony Ponies. 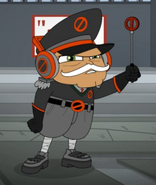 General Nofun as he appears in Hello Puppy

General NoFun as a child.
Add a photo to this gallery
Retrieved from "https://kuukuuharajuku.fandom.com/wiki/General_Nofun?oldid=10494"
Community content is available under CC-BY-SA unless otherwise noted.