"Labor of Love" is episode 5B of season 1 of Kuu Kuu Harajuku.

The episode begins with Love explaining her newest invention, which the girls are able to control through the internet.

When Love calls the other girls over to show them the password, an excited, nosy Baby asks what it is. The other girls attempt to hide it from her due to a previous incident involving ordering online. The first flashback shows a giant candy cane marshmallow that Baby ordered, which ultimately explodes. In the next flashback, she ordered a turbo engine for the van, which speeds off into the city and explodes in the sky.

In the final flashback, Baby in the process of ordering, which is immediately delivered to the door. Music opens it up and a sea of adorable kawaii monsters flood into the lounge. 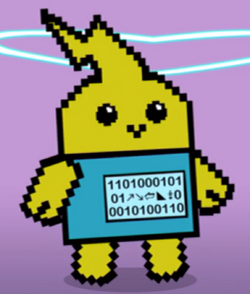 Back in the present day, Baby shrugs all those scenarios off saying it's "no big deal" but the other girls are firm with their decision. Rudie comes in and announces it's time for HJ5's first ever live webcast. Rudie walks over to the laptop, which Love scolds him not to touch. Rudie claims he read "livestreaming for dummies" before he came over and plugs the wires into almost every available socket. Everyone, even Chewie, knows the password to the computer, upsetting Baby. When Rudie goes to start streaming, the electric short circuits momentarily before restarting, meeting with cheers from everyone. Love finishes bringing the computer back online when she's met with a strange creature that seems to leave the computer through the connected wires.

The speakers begin to topple over, and the girls manage to escape, unharmed, but one of the speakers catapults into the sound mixing station, which bounces into the drum set sending a cymbal hurdling in the air, cutting the rope to the strobe ball sending a scared Rudie into the arms of Music. The yellow spark finds it extremely amusing before running off. The girls take a quick break from the excitement.

Angel goes to warm up a bag of popcorn in the microwave and asks if Rudie is purposely sabotaging them before Baby interjects with the fact it's wrong to keep secrets. G offers her a drink of water, saying she might be dehydrated. The popcorn begins to explode in the microwave. Rudie comes in with a disc while an avalanche of popcorn engulfs the room much to the amusement of the yellow spark, who laughs and runs away. Love notices it and asks if anyone else saw that pixel matrix binary code avatar just then.

Music and Angel are watching television while Love does some research on the avatar she saw, when Angel suggests that she spends so much time on the computer she's starting to believe they're alive. G comes in and starts whispering to the girls, followed by Baby who asks for the password again. The girls all make up something on the fly which cause Baby to storm away.

The television turns to static, and, reminiscent to that of the speakers, falls over revealing the avatar Love has been seeing all the day. The girls think he's adorable (with the exception of Music, who can only see the negative in the broken television). Love defends him, say it's not his fault he draws power from electrical sources causing them to malfunction. Angel realizes that e-mail, texting, and the internet will be affect, so she orders to capture him. The avatar runs away as Rudie walks into the room and fails to capture him. Love discovers that Rudie's power surge caused a program to become corrupt, allowing a computer virus to run rampant through the girls house. The only way to get rid of it is to debug it and reupload it to the computer.

Baby, depressed in her room, solemnly swings on her cloud seat, notices the avatar in her room and becomes happy once more. She decides to name him Sparkski. Angel and G come in asking if she saw any sort of computer "gremlin" running around, which is currently hiding inside the computer in the room, and Baby lies and tells them she hasn't seen anything. Baby believes Sparkski is hungry, so they head to the kitchen. Music and Love enter one of the rooms and see Sparkski causing chaos once more. He manages to escape and uses the currents from the electric box to "power up".

Rudie is seen alert, cautiously walking around the hallway when he sees Sparkski running towards the opposite end.

Rudie attempts to block him off, but becomes dizzy when he runs back and forth, allowing Sparkski to easily pass. Baby meets up with him and helps him escape from Rudie as she goes towards the opposite rooms. Rudie manages to find the room he's hiding in but fails at capturing him.

Sparkski makes his way to into the downstairs electric room, which controls all the power in Harajuku. Cornered by the girls, Sparkski cowers in fear before Baby comes in and rescues him. Sparkski touches the console, turning of the power in the entire city. The girls are shocked to find Baby kept this a secret. She says Sparkski is her friend and he was hungry, and the only person that didn't keep a secret from her. Sparkski apologizes for his actions, which G appreciates but mentions it's time for him to go home.

He begins to fade, due to the entire city's electric being out, there's no sources of energy for him to absorb. Love comes up with a complicated explanation that could possibly work: attaching a lightning rod to the roof and have the opposite end face towards a storm cloud to absorb electricity and power up the grid. The plan ultimately works, and Sparkski becomes recharged with power. Love begins the debugging process using G's comb. Sparkski thanks Love for the debugging and is ready to go back home. He is uploaded into the computer and promises to come back and play, without all the crashes. Rudie excitedly enters the room says they can finally do the webcast but is put on hold when G wants to have a discussion with Baby.

Baby apologizes for keeping Sparski a secret but the girls admit that they were in the wrong, keeping the password a secret. The password is revealed to be "Baby" which she finds sweet and says she hopes she can remember it, causing the other girls to laugh.

(while inside the popcorn avalanche)

Retrieved from "https://kuukuuharajuku.fandom.com/wiki/Labor_of_Love?oldid=1722"
Community content is available under CC-BY-SA unless otherwise noted.