Reporter for the Harajuku News

Mauve Madison is a recurring character in Kuu Kuu Harajuku.

Mauve Madison is a popular television personality and highest rated talk show host. If there's an exciting story or breaking news happening, she's there to report on it. She is described as being, savvy, sassy, and telling it like it is. Her catchphrase is "Ciao!", hinting she may be of Italian decent.

She is the current host of the Totally Teen Awards.

She provided live commentary of the Ponycorn Cup in Phony Ponies.

Angelica is the second smartest person at our school.

Angelica and Love getting Mauve Madison to choose which shampoo is superior.

Mauve with her dog Snooky.

Mauve telling Rudie not to touch the science experiment.

and she’s very angry with Rudie!

Rudie suddenly realising he should be as far away from Mauve as possible,

because she’s still angry with him! 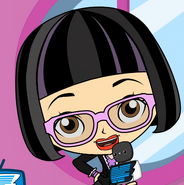 Mauve Madison writing an article.
Add a photo to this gallery
Retrieved from "https://kuukuuharajuku.fandom.com/wiki/Mauve_Madison?oldid=9842"
Community content is available under CC-BY-SA unless otherwise noted.