Mind Over Manager is episode 24b of season 3 of Kuu Kuu Harajuku.

Love: Rudie, can you reverse the MoodTube's polarity and transmit us back to reality?
Rudie: Depends, can you repeat that in one syllable words?
Love (frustrated): Switch the black and green wires and press the big red button.

Love wants Rudie to turn on the MoodTube.

Rudie doesn’t understand what Love just asked him to do.

It takes five girls shouting and pointing for Rudie to realise what he was supposed to do,

turn on that device that’s standing nearby.

Rudie doing something he really should not, leaning on the MoodTube.

HJ5 wondering why the MoodTube screen turned off.

Rudie trying to turn the MoodTube dish to point the other direction by using brute force.

The MoodTube is working again and it’s pointed at Rudie.

Just now, Rudie works out that pulling the transmitter dish off the MoodTube wasn’t the safest thing to do.

The broken MoodTube is zapping Rudie

Love and Baby wondering where they are.

G, Music and Angel are also wondering where they are.

G wondering why she can hear Rudie’s voice, but not see him.

Likewise, Rudie can hear G, but not see her.

Rudie asking if there’s a foosball table with Rudie players.

Baby wants to know how he knew it would be there.

Music is wondering how the heck they ended up inside Rudie’s imaginary happy place.

Love is excited to discover her invention can teleport them to imaginary worlds.

G is more interested to know if they can be teleported back to reality.

Love explaining to Rudie how to reverse the teleportation, using really big words he won’t understand.

Rudie tried to follow Love’s instructions, but then started dancing for no reason.

Angel realising that Rudie’s ability to walk is disrupted with five girls in his mind.

Baby has to control Rudie’s walking, since he can’t do it himself.

And when Rudie got there, the MoodTube was gone.

The girls are horrified to find out the MoodTube is missing!

ROD waiting for Rudie to explain why they’re going across town to find a device to get HJ5 out of his mind.

Love found a computer with video clips from Rudie’s memories.

She’s laughing at how funny the memories are.

ROD is wondering why Rudie is moonwalking backwards.

Because Baby is still controlling his walking by dancing.

Rudie trying to get into the club to get the MoodTube back, but the bouncer won’t let him enter.

Music wants her turn to control Rudie with dancing.

ROD suggesting the easiest way to get into the club is to simply buy a ticket.

Simple solutions always work, the bouncer is letting Rudie into the club.

Five girls shouting at once inside Rudie’s head=instant head pain.

Stumpy Joe wondering why Rudie said something so unusual.

Baby realizing she should not be talking while standing on Rudie’s control pad.

ROD wondering why they are looking for the MoodTube at a place with such a convoluted name.

TourVan arriving at the repair shop.

Rudie can’t get the MoodTube back because he doesn’t have the correct documentation proving ownership.

Rudie is not allowed back inside the building.

Angel wants to know how they can get the MoodTube from the repair shop.

but Baby won’t let her have a turn.

Sneaking past the desk clerk and borrowing the repair form.

HJ5 should not be jumping while standing on the control pad,

because they are making Rudie bounce around!

but then she saw the size of the warehouse and doesn’t want her turn anymore. 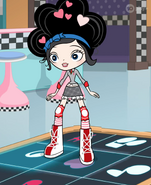 Love on the control pad.

The MoodTube is not where it’s supposed to be (again.)

What is that paper in the empty cubicle?

HJ5 teleported back to reality.

Baby knows where Rudie is,

he’s in her imaginary happy place.
Add a photo to this gallery
Retrieved from "https://kuukuuharajuku.fandom.com/wiki/Mind_Over_Manager?oldid=8726"
Community content is available under CC-BY-SA unless otherwise noted.