Phony Ponies is episode 3b of season 1 of Kuu Kuu Harajuku. It originally aired on October 5, 2016.

G gives Baby a ponycorn to keep her out of trouble, but the plan backfires when she uses it to enter the Ponycorn Cup, in which the cute critters are turned into monsters.

Things heat up right away when the episode opens with a giant speaker/octopus like monster causing havoc on stage.

The tentacles have wrapped themselves around Baby who claims it's just misunderstood. G each gives the girls a task. Baby innocently tells the monster that she also gets upset when hungry. Angel distracts the monster by holding up a "female" monster while Love pulls the cord. Music swings in on a power jack cord and rescues Baby. The monster short circuits and returns the speaker to normal. The girls remind Baby not to try and cuddle every single monster (or robot, etc) she sees. Baby is disappointed, but the clock rings and Baby runs off to hug something, much to the other girls disappointment. Back at the lounge, the girls talk about how Baby's cute obsession has led to 17 rescue mission in that week alone. They try to find her something less lethal and Rudie pops in and makes a whinny but says he was just horsing around which gives G an idea.

The girls bring Baby out to her giant wrapped present, and introduces her to "Pistachio", a pony-corn.

Baby immediately falls in love with him and rides him around the field. After testing out her equestrian skills, Baby mentions that she is eligible to sign up for the pony-corn race which she feels they're ready for. 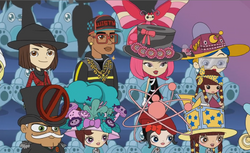 Mauve Madison is providing live coverage of the race and mentions that, despite being about the pony-corns, there is major fashion going on off-field with the audience wearing stylish hats. Rudie strolls in and tells the girls they look fabulous, which is good, because he just booked them a gig as the ending ceremony of the equestrian show. An elderly lady with a baton takes the stage and announces herself as Phillipa Crop, a 16-time equestrian champion and judging official. She gives the audience the cue to applaud, much to their confusion. Phillipa welcomes the competitors into the arena and the girls cheer for Baby. Through the use of her binoculars, G notices one of the ponies, Night Sky, is turning evil. The pony grabs it's owner by the hat and eats it when a giant net captures it. The girls worry for Baby's saftey.

The first round begins, which is the rainbow hurdles. Baby and Pistachio take an early lead and successfully jump the first hurdle and continue to take the lead until Troy and Candy Frenzy ride up, neck to neck. Candy Frenzy begins to turn evil and bucks Troy off, eating his hat, and suffering the same fate as Night Sky. Baby manages to win the first event and the girls celebrate, but also question the actions of the pony-corns, what is happening to them that makes them turn violent? G wants to take Baby out of the race but the other girls think she's just being overprotective. Angel mentions that Colonel Spike's security guards are all over the arena. Rudy comes up with a plan to get the girls on the field. A makeshift horse costume held up by Music, Love, and Angel, is G's only chance to get to Baby. One of the guards stops them short of the field before asking to feed the pony which ends up being a problem. They manage to get away from the guard and enter the field.

The girls split up, Music is in charge of finding where the evil is coming from, so she immediately checks the little "dictator" section and questions Nofun who says only a monster would dislike pony-corns. The next event, pony rhythmic gymnastics, begins. The girls see an opportune time to get to Baby, but the spotlight shines down on them and Phillipa asks them to introduce themselves, which they do as "Tiffany and Tiffany" and gives them a ribbon to dance with. G struggles to use the ribbon but manages to meet up with Baby, who is shocked to see her out there. The girls came out to protect her from any potential danger, which Baby says that's sweet, and it's time to go jump over the lava pit.

Outside, Music intimidates Yelda Googoo, one of the other riders, to admit he's behind the evil pony corns, when one of the ponies tackles him to the ground and eats his hat. Music catches Phillipa Crop using her baton as a magic wand and questions her actions. She admits that the event has become more of a fashion competition than a showcase of the pony-corns. Phillipa won't stop until all the hats have been destroyed and blasts Music with a bolt of magic, using her wand to unleash the rampant pony-corns. They charge madly towards Baby (whose wearing a funky fruit hat). G uses some spray whipped topping on her hat and taunts the pony-corns in her direction.

The girls get tangled up inside their costume and trip over the rainbow hurdles, exposing Love and Angel and a tuckered out G. The pony-corns, still in pursuit of them, are met with a determined Baby and loyal Pistachio. Baby swoops in and saves the girls.

Phillipa Crop yells for the girls to give their hats or Pistachio will get zapped. Music takes the wand away from Phillipa, and the girls toss their hats on to her head, and the pony-corns chase after her.

The girls are seen on stage waving at the audience, and they are able to return the pony-corns to their normal, cute state. As they're about to begin, the tentacle speaker monster returns, but Baby says she'll handle it. In the next shot, the speaker is seen relaxing with a magazine, Baby giving it's tentacles a blow dry with the hairdryer.

Retrieved from "https://kuukuuharajuku.fandom.com/wiki/Phony_Ponies?oldid=4028"
Community content is available under CC-BY-SA unless otherwise noted.