Rudolph Rhodes, nicknamed Rudie, is one of the six main characters of Kuu Kuu Harajuku. He is the band manager of HJ5.

Rudie is the hyper, overexaggerating, and clumsy manager of HJ5. He desperately wants his girls to succeed and become music stars, but things never go as planned. He is a nice guy, but he is definitely naive and often gets the band members into predicaments that they have to get themselves out of. He describes himself as a master of deal-making and will jump at any opportunity to expand his "connections."

Rudie sometimes stretches the truth about the gigs he schedules for HJ5. Due to his personality, Rudie is very unlucky. In almost every episode, he loses his clothes, crashes into something, or makes someone angry. Sometimes, all three happen.

In "Oh, G," Rudie admits he is afraid of butterflies due to a bad experience as a kid. In the flashback he is seen attempting to capture one inside a net. As he corners it on a tree he swipes the net, but aims too high and the butterfly escapes. In addition he knocked a beehive down on his head.

Rudie has a big crush on Music. In "Greenhouse," he professes his crush to her. He says to Music, "I've always had a very special spot in my heart for you and I think—" but is cut off before he can finish saying what he feels. Music also has a crush on him, and she kisses him after he falls into a coma in "Emotizoms."

He has a nephew named Jimmy who he is extremely proud of. His catchphrase is "Nailed it!" He seems to have an ongoing rivalry with Sammy Stars, who always manages to one up him when it comes to winning hoodies at the Totally Teen Awards.

Almost every gig he gets the girls seem too good to be true. In G, This Is Awfully Deep it was revealed that he is not above lying just to make himself look good as their manage.

He is a big fan of Twisty T as seen in Super Kawaii Sunday, going so far as to stalk him outside the restaurant and pretend to be the valet.

Rudie always seems to have a business card handy when. In The Kawaiifier he makes the Tanaka Boys sign a contract stating HJ5 is not responsible for any damages that occur while using the Kawaiifier.

Despite some of the above examples he does care for the girls as a friend and manager and even shows compassion and common sense.

In Totally Teen Genie at the end of the episode he admits that he doesn't need a hoodie award to make him proud, the girls do that for him.

He (unsuccessfully) attempts to rescue the girls when the sinkhole collapsed in the park in G, This Is Awfully Deep.

In Delectabubbles, he shows some common sense as a manager. While the girls immediately wanted to go to Bubble Land and participate in the Yum Yum Band Competition, Rudie was skeptical because there were no formal contracts and didn't exactly trust Madame Shout.

In Snowy the Frostman, before he did a gig for HJ5 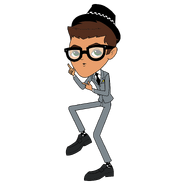 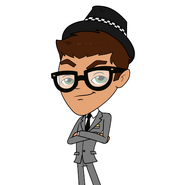 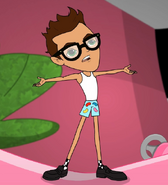 Looks like Rudie's all "washed up" (Adventures in Housesitting)

Rudie will do anything for a business opportunity.

Rudie looking at the doughnut case in Delectabubbles.

Rudie trapped inside a containment bubble in Delectabubbles.

Rudie surprises the girls with a contract to sign with Monotone Records in The Dotted Line.

Rudie reveals he got a gig for HJ5 at the Harajuku Stadium.

Rudie as a monster pet.

Rudie as a garden Gnome

Rudie when he Was Wheaton White's Manager.

Rudie as a child.

Rudie cuddling Pickle.
Add a photo to this gallery
Retrieved from "https://kuukuuharajuku.fandom.com/wiki/Rudie?oldid=10433"
Community content is available under CC-BY-SA unless otherwise noted.