Say-Wah uses some isotopic shoes to make her appear to be the newest member of HJ5.

Wearing those shoes with that outfit is a fashion crime.

Love thinks they have bigger problems then co-ordinating Say-Wah’s outfits.

G is worried about Say-Wah.

But she’d also love to have a pair of Say-Wah’s new shoes!

That’s not a watch, Rudie.

HJ5 aren’t so convinced Say-Wah is a minor problem.

HJ5 on their way to the concert.

There will never be a sixth member of our band!

HJ5 are very surprised by their new cosmetics!

HJ5 watching the news report on their instant makeover.

Love is determined to solve the conundrum, no matter how long it takes!

The girls waiting for Love to say something else.

You have to see it to believe it.

Love, how are you playing table tennis like that?

The girls agree with Love’s assessment of their aesthetic perspicacity.

Say-Wah is moving at hypersonic speed.

Angel thinks Iso Topic is the name of a fashion designer.

Isotopic is not the name of a fashion designer.

The girls waiting for Love to explain how their swatches will help solve the Say-Wah problem.

These swatches will allow us to run at supersonic speeds.

Baby turning on her supersonic speed without being properly prepared.

Music surprised at how fast Baby ran away!

Baby discovering that she should not have stopped running while on the ceiling,

Rudie thinks his swatch can allow him to run that fast too (it can’t).

HJ5 ready to run at superspeed.

Baby thinks she is moving at superspeed,

then she realises she forgot to turn her superspeed on.

Music is faster then a speedboat!

What just passed us?

Love couldn’t resist showing off her ability to do a one-handed split handstand.

Angel pointing at the side door.

A conveniently unlocked and unguarded side door.

Superspeed makes HJ5 imperceptible, so why are they sneaking?

but she isn’t here.

Oopsie, we were looking in the wrong room.

G opening the door without using the handles.

You’re not a true evil villain unless you taunt the good girls.

Music is angry with Say-Wah.

I own your song now.

This exit is closed.

Gimmee the song back!

up until Angel takes it back.

It’s mine, all mine!

Say-Wah hears a noise and looks around to see

the other four members of HJ5.

Round and round Say-Wah will go.

Let’s all go for a spin.

G has the song.

The night security guard realizing he’s going to be retrenched.

Never try to flying kick those can do a backbend, you will always miss!

G remembers the design flaw in the isotopic shoes. 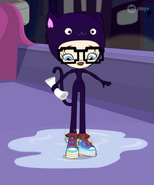 Next time, get waterproofing on your speedshoes.

Say-Wah is still trying to get the song, even as her superspeed slows down.

Why doesn’t Say-Wah start her own band instead of always trying to join ours?

Add a photo to this gallery
Retrieved from "https://kuukuuharajuku.fandom.com/wiki/Supersonic_HJ5?oldid=8256"
Community content is available under CC-BY-SA unless otherwise noted.