Twisty T is a character who appears in Kuu Kuu Harajuku.

Twisty T is a big time music producer in Harajuku. He is the husband of Jo Jo Jolie, who he married in "Emotizoms".

Twisty was first seen in Totally Teen Genie, riding inside a green jeep and singing along to the girls' "catchiest song", T.G.I.F. Later in the episode, he appears on the red carpet premiere of the "Totally Teen Awards" where he is getting his picture taken.

In Angel's Flight it is revealed he is an uncle and throws his nieces and nephew a birthday party. He also appears on the "Runway Rag" fashion blog.

He appears at the end of Adventures in Housesitting, after the girls destroy his mansion. It turned out he was actually grateful for it, as he didn't like the place much anyway.

In Super Kawaii Sunday it is revealed he owns a hovercar but it gets destroyed at the end of the episode, making him extremely angry. He seems to have a soft side for cute things, because he takes one look at Chewie on the cover of Baubles Magazine and says "Oh, super kawaii", completely forgetting about his wreck of a car.

In Oh, G his car is turned into a painting by the butterfly. It turns out he signed his name on the bottom and was able to get it published in the museum.

In Happy Slam Twisty T is the new owner of M.E.B.O. and he offer HJ5 to feature 'Happy Slam' at the reopening of the museum. Due to Baby's reckness, Twisty creates new art and everyone love it.

In The Sixth Wheel, Twisty T introduces HJ5 to his grandfather, Tec Tamado, who lives at the same retirement home as Rudie’s grandmother. 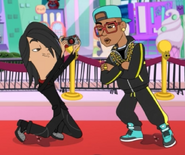 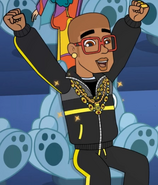 Twisty T with no cap as seen in Phony Ponies.

Twisty T watches as his mansion explodes in Adventures in Housesitting.

Twisty T after his hovercar crashes.

Did you feed Fishy?

G presenting Twisty T with the list of broken stuff.

Twisty taking a Selfie With HJ5.

Twisty T as a monster pet.

Twisty T wondering why there is a dinosaur standing there.
Add a photo to this gallery

Twisty T's recording Studio.
Add a photo to this gallery
Retrieved from "https://kuukuuharajuku.fandom.com/wiki/Twisty_T?oldid=9918"
Community content is available under CC-BY-SA unless otherwise noted.